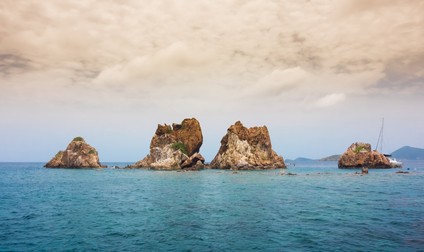 A trip to the Virgin Islands is many things-exciting, romantic, relaxing and exhilarating all at the same time. The thing you may not realize though, is that a visit to the Virgin Islands is like a step back in time—to the days of pirates, canons, and stolen treasure. Rumors of buried treasure in these parts run rampant, and history shows many of these rumors to be based in fact. Perhaps the most famous buried treasure story revolves around world renowned Norman Island—the inspiration for Robert Louis Stevenson’s epic novel, Treasure Island.

Norman Island is famous for many things, but today, it’s biggest claim to fame is “The Caves”—three distinctively different caves that you can swim right into. Schools of blue tangs, yellow tails, and sergeant majors will greet you upon entry. To truly experience the caves, bring a waterproof flashlight with you. As you go farther back into the caves, they get darker and darker! Look closely-these caves are rumored to hold pirate treasure!

A little farther off shore, you find The Indians. The Indians are named such because the four rocky pinnacles, rising straight up about 100 feet from the ocean’s floor, resemble an indian headdress. The Indians are amazing because of the many corals that inhabit the rocks. You’ll find both hard and soft corals—including Fire Coral, so be really careful—colorful sponges, blue tang, parrotfish, cow fish, damsels, sergeant majors, queen angels, wrasse, and occasionally, an eel or a shark. The rocks are also home to an abundance of lobster.

Around the corner from The Caves and The Indians is The Bight—a protected cove that houses the Willy T, a three story, 100 ft. steel schunner anchored in the harbor. The only way to get to the Willy T is by boat, and on crowded days, boats are tied 30 deep. Getting to the Willy T is an adventure all its own, as you climb from boat to boat to get on board. Besides being a great floating restaurant, the Willy T is famous the world over for debauchery and shenanigans. Seriously, this place gets wild. It’s not uncommon to see a naked patron jump from the top story to the waiting waters below. The later the day gets, the wilder the Willy T becomes.

On shore at The Bight is Pirates Bight, the only building on Norman Island. It’s a restaurant, bar, museum and gift shop—you didn’t think we miss a chance to sell you a souvenir, did you? It’s also a gathering place for anyone anchored in the Bight—its beach is spectacular and live music can be heard in the evening. This is an amazing place to watch the sunset.

When planning your trip, make sure a day on Norman Island, BVI on your list.