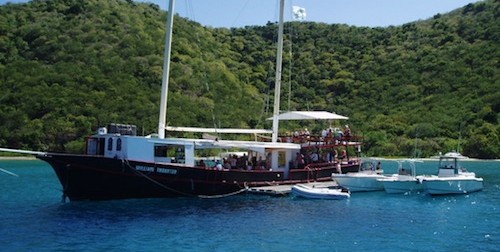 Wild Times at the Willy T

If you’re looking for somewhere memorable to spice up your stay in the British Virgin Islands, the Willy T is the place to be. What sets this bar and restaurant apart from virtually any other establishment in the world is that it’s a three-story, 100 ft. schooner moored in the midst of one of the world’s most stunning anchorages called the Bight off Norman Island.

Depending on the time and day you dinghy or motor up, you could see and experience just about anything–from a quiet lunch crowd to an all-out frat house style party. The past—its history, and the present—it’s wild reputation, are just a few of the things that makes the Willy T one of the most famous—and infamous–beach bars in the British Virgin Islands—and the world.

This British Virgin Islands living legend was established in June of 1985 by owners, Mick and Annie Gardener, with the goal of creating a one-of-a-kind, “bistro on the briny.” Back then, the ship was still a wooden 1935 Baltic Trader, which slowly amassed patrons and tourists sailing to the Bight, looking to explore great snorkeling and SCUBA diving sites.

On the fateful night of June 11, 1995, more than 10 years into its operation, William Thornton sank on her mooring. The gushing volume of water from a leak overwhelmed her bilge pumps, allowing the Caribbean Sea swallow the wooden ship whole. She was subsequently raised, stripped of all machinery, hauled to a new site and submerged in about two hundred feet of water, in the hopes of making her a new BVI dive site. For a while, the site gained popularity among snorkelers and divers given its unique story, however, sea and weather conditions eventually tore her apart and nothing is left of the old schooner today.

Rebirth of The Willy T

Just seven months after old William Thornton’s unfortunate demise, the new “Willy T” hoisted her flags and sailed into business on January 06, 1996. A 100-ft steel schooner, the new ship is much larger and durable than the original, and has more space to house a bigger lunch or party crowd.

As popular today as her predecessor 20 years ago, the new Willy T keeps up the tradition of good food, refreshing rum drinks, partying, body shots and the famous “ski shot”, where four participants drink from shot glasses set into a water ski at the same time. Led famously by lead bartender Zeus, a wild, free, fun loving character with an infectious smile and a love of fun. If you’re looking for a good time, Zeus and crew never disappoint.


Another tradition Willy T is famous for is the poop deck jump. Ladies can “earn” a free “Willy T” T-shirt if they jump naked, drawing in a crowd of enthusiastic supporters. Although signage posted everywhere says “DO NOT JUMP,” you’ll still see patrons jumping with only their birthday suits on, pretty much every day.

The Willy T is like no other bar in the world. If you get a chance to spend an afternoon, and you’re not easily offended, this bar is a wild and crazy “once in a lifetime” experience.